Racing with my Head upside down - Women's Tour of New Zealand

" Every time I go to the first race of the season I always ask myself, why do I keep putting myself in those situations? "

Then, about when I land comes the answers; those mountains, that blue ocean, these country roads, those sheep in the middle of the road, the people, the sport the love, the passion...

This time I must say I was really excited to compete in New Zealand, since it was until then one of the numerous places to visit on my bucket list!

The tour was promising with 13 teams at the start. 5 days over 600km of racing some great climb and perfect weather. The 5 stages where a Team Time Trial, a 130 km flattish road race, a 125 km circuit race with a good punchy climb in the middle, a top hill finish stage of 106 km standing as the queen stage of the tour and a final 120 km roally road race finishing in the center of Masterton (Wararapa, NZ), city hosting the 2015 Women's Tour of New Zealand.

The DNA p/b k4 racing squad composed by me, Lauren DeCresenzo, Breanne Nalder, Anne Perry and the guest rider Jeannie Kuhajek from ISCorp elite cycling team arrived in New Zealand a week earlier for a second team training camp on the courses roads. The early arrival happened to be really useful since couple of us experienced some bad luck in the travel. One of us (Lauren) was missing after missing her connection between LAX and Brisbane she also got her bike lost in the transit and it took 3 days before getting it shipped at our place. My bike also took a couple days before showing up at the same time then Lauren's. Following that, almost all of us got the flu and where sick of just recovering from the sickness in the first days of the tour. Nevertheless, it was great to get to ride the courses and also to meet a bunch of local riders who ended up being our biggest fans on the side of the roads during the races! THANK YOU SO MUCH Y'ALL 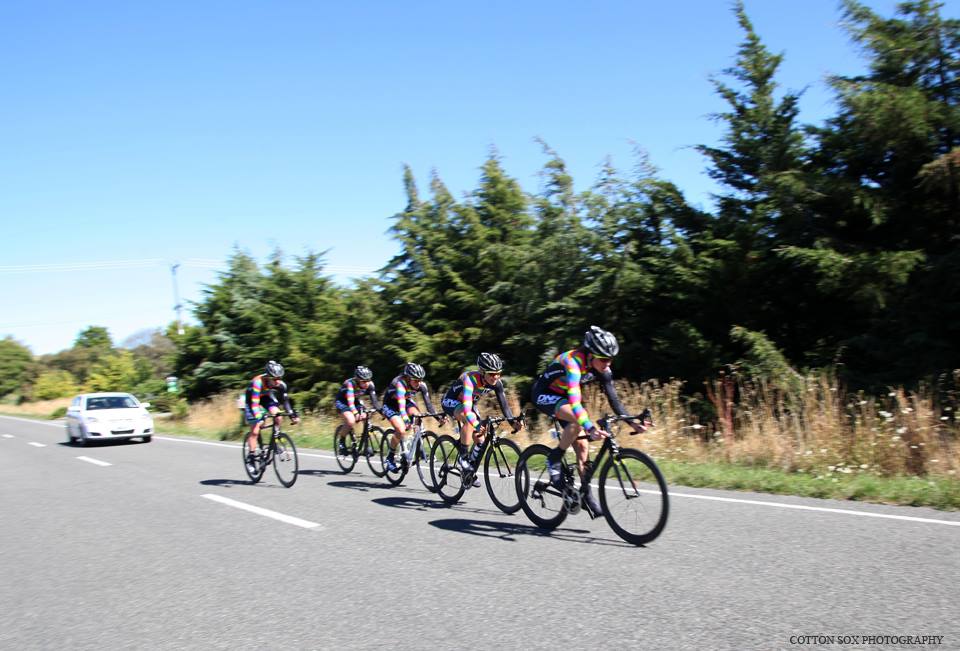 The stage one was going on mainly in downtown Masterton. It was a quite technical course of 14.6 km with over 6 corners. We ended up finishing at the 8th position behind team USA who won the race with 18 seconds over Team Australia and 42 on Team Tibco-SVB. We all did our best but the health conditions and the lack of experience in racing in a Team Time Trial of some riders leaded us to a slightly disappointing finishing time (1: 38 sec behind team USA.) 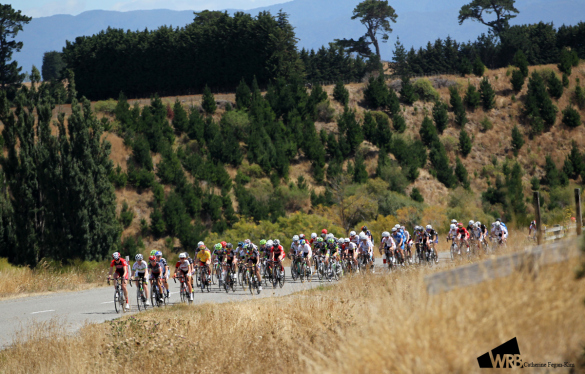 The first road races planned as a 135 km road races trough the country with 3 laps of a circuit at 50 km in the race ended up being 142 km after mistaken extra lap of the 6.4km circuit. Team USA controlled the race all the way until the end. It was on of the longest race I'd ever done, we rode so slowly! It was close to look like a Sunday recovery group ride! Without any real pure pack sprinter in our team for the race, we all focused on finishing with the same time then the peloton so we weren’t disadvantage for the following stage the next day. 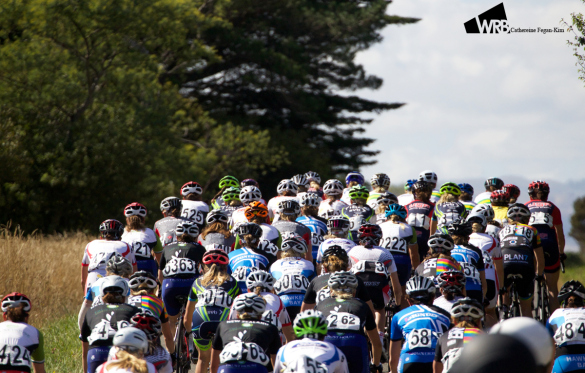 On day 3 it was going to be the first real hard course of the tour. 9 laps of a 12 km circuit including a 1.5 km climb halfway trough. Many groups attempted to get away that day especially on the top of the climb and in the kilometers following it. The circuit was really twisty and the strong wind that day where both favorable for break away. At 3 laps to go, a group of nine finally got separated for good from the peloton. Unfortunately we missed the move and therefor we where forced to a quick tactic so at least on of us get back with the leading group. Since the race was almost over we didn't have other option than trying to bridge solo. Lauren, Jeannie and I tried and I finally got away at 2 laps to go. I had to bridge 2 min with the group in front of me. A huge task knowing that they where 9, I was one and that they weren’t waiting around but racing the end of that 125 km race. Even if I didn't make it all the way to the group, I still bridge 1:30 of the break away and put 2 minutes on the peloton taking at the finish line the jersey of the U23 leader. I was so happy and so proud of the 12km time trial I'd just made. It was also the first ever time I stepped on a UCI podium next to Megan Garnier wearing the yellow (leader jersey) and Eveline Stevens wearing the polka dots (Best climber Jersey). One thing is sure, while I was going the online things I was thinking of where all the tips and advise I had gotten from all the great coaches that had helped me for the past few years: Steady, drink a lot, eat a lot, get a coke and the most important, don't give up and keep pushing. That night, we had a goal, keeping the jersey and the 10th place at the GC. We where all so pumped! 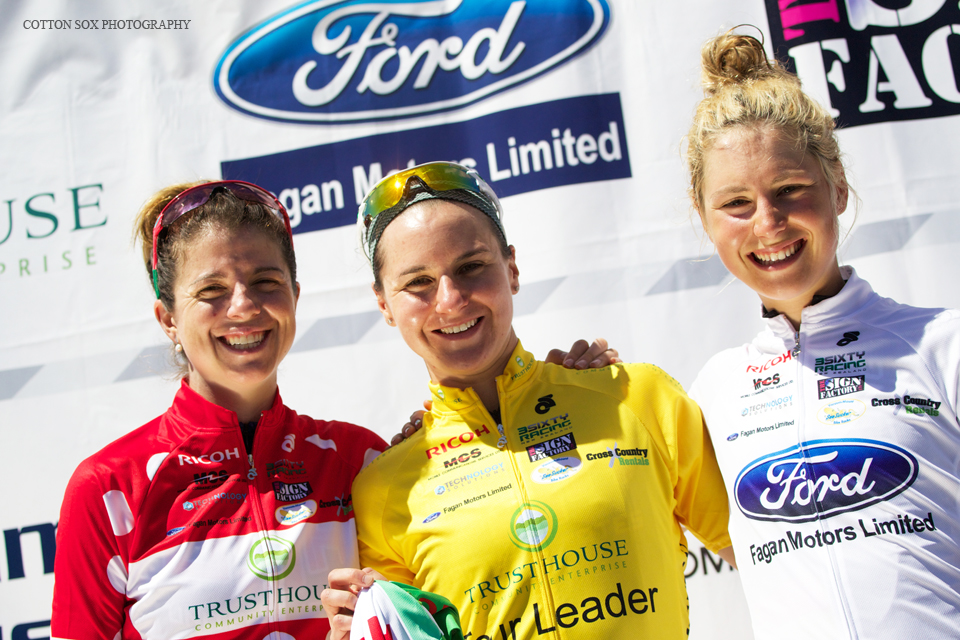 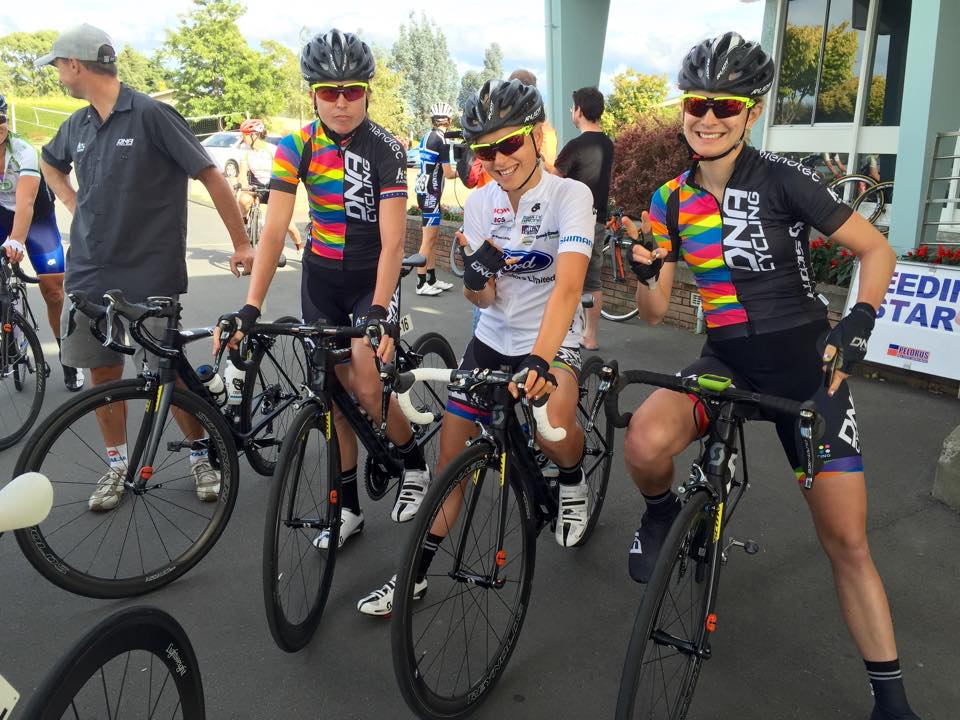 It was a good morning yet, a lot cooler than the days before. We had all talked about the course the night before and we knew what would happen (at least we thought we knew at the moment.) It was really windy at the start, the first stretch was relatively covered by some trees and houses but at about 40 km in the race, a long and rough cross wind section was waiting for us. The race didn't really start until that road. We approached the last corner before entering in the cross wind at the front of the peloton, but after going trough it, I unluckily found myself behind the wrong wheel and got gap from the peloton, having to chase it for a bit by myself. Having left a lots f energy the day before, I was really tired and if it would had not being of my teammate Lauren, I would had have a lot more trouble getting back in the pack. During that time though, a group of 9 girls got away and before we had time to regroup as a team and rotate at the front in the hope of getting them back, the break away had already 2 minutes ahead and we where not enough team at the time to chase them down. It was the good one, I wasn't in there and an other young rider had have hoped on their wheels. I knew at the time that if the break away or at least that young rider was taking over 40 sec on me I would lose the jersey. Incapable to bring them back or even to get closer to them, we all finished the stage burned down from the work and really sad that we had missed the move and had lost the jersey. 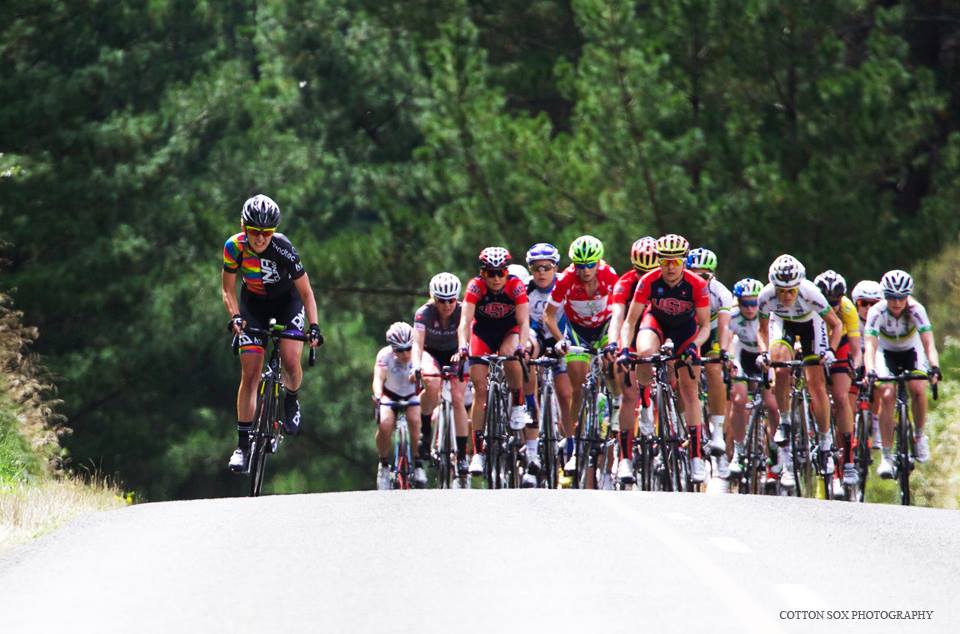 The last stage was 122.5km roally with a technical finish in the town center. We started the stage with the thought in mind that we had nothing to lose at that point. I was 2 almost 2 minutes behind the white jersey at 16th position and none of the others had a particular position to fight for. We decided to go for the win. I was tired and put at the place of leader, witch mean I didn't do the most work out of all my teammates. In fact, that day ended up being Lauren's. She did an amazing race impressing pretty much everyone who where following the race that day! The race was really aggressive, from km 0 girls kept attacking over and over until Lauren took off on her own riding away from the peloton, putting over 2 min on us and took at the same time all the KOMs. She then got cut by the pack but kept working really hard all the way until the end of the finish where she placed 12th in the bunch sprint.

In the end, we did face ups and downs throughout the race but I think we'd all came back with more good moments than bad ones. Things I learned: put sunscreen in New Zealand: The sun is really strong and if you don't you WILL burn and you might get cancer (no ozone you guys!). Also drink a lots of electrolytes, everyday, each of us would get trough at least 4 or 5 bottles of osmo active hydration and each night I would find myself having a headache and peeing yellow (Dehydrated, not good for recovery). Drink coconut water instead of water, it as a bit of sugar, lots of electrolytes and it helps keep drinking when you get sick of plain water. Osmo acute recovery blended with ice makes the best recovery slurpy on really hot days like we had! An other thing is that anything can happen, I already knew it, but it was the first time I had tried a bold move in a race and got reward for it. If you don't try you won't get anything. I also feel very lucky and proud of being a part of that team in the tour. It was a great experience and a good opportunity to get to race and learn more about my new teamies/homies. 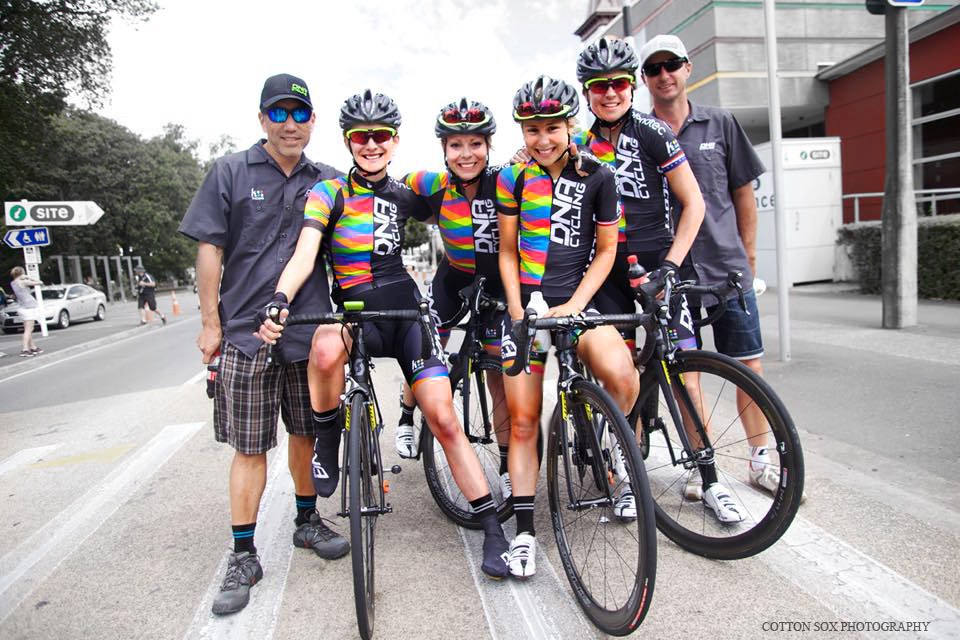 "And so every time I come back from the first race of the season, I don't question myself anymore in why I do it, I just feel really excited to race again later!"